Should we show the sound? 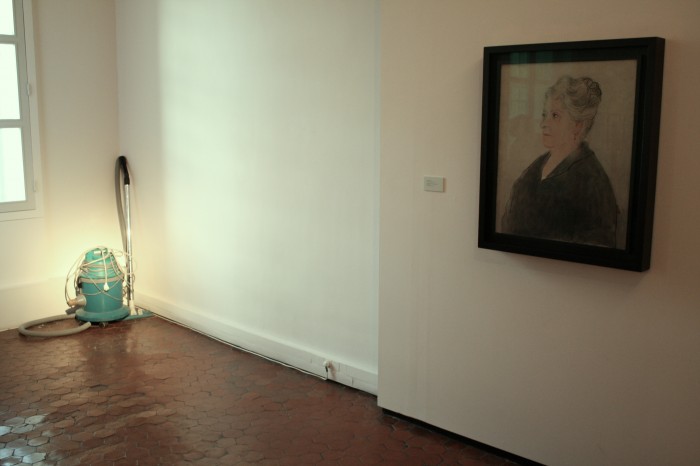 Gilles Aubry does not mind talking about his work. Combining archival records, found sounds, interviews and electronic processing, it is, him being ironic, “he appropriated the museum Réattu environment in the manner of a settler who is entering a new land”. His intervention, he adds “was first to engage in a bit of ethnography, then spread the good word of sound art, while stripping the museum of some secret sounds, and defining his territory. “Throughout this journey, the visitor will thus encounter a dozen mostly new sound pieces. The proposal is open and everyone is invited to create his/her story based on the sounds that the artist assembles or detaches from their original site, in a series of echoes that he distributes in space as a composition of colors, volumes and heights. Each sequence is independent and at the same time, on a course while fitting in a route whose setting is defined. Thus, he enjoys the idea that some will see a reference to Picasso in the exhibition of vacuum cleaners (borrowed from the museum). But he is surprised that we insist on seeing references to his native Switzerland when it is, equally, reflections on the Mediterranean or Africa. For Gilles Aubry travels and from his journeys, he brings back the sounds found in his works. His microphones like to tap into the stream of a world in transit and transformation. The acoustics of tarmac fascinates him. In the Arles exhibition are slipping in sounds borrowed from the airports of Berlin, Rome, Brisbane, Basel and London. Other scenes are  cut in from the forests of Congo.

His approach covers radio, field recording and experimental music, but he does not want to be associated with a particular discipline area. The important thing for him (in short) is to uncover the “musical” or, simply to” incite listening” where we cannot imagine it. He belongs to a generation – in the line of Schaeffer or Ferrari – approaching listening in its entirety, not only in acoustic and musical terms, but also in a cultural and anthropological perspective. Therefore, when traveling he always has a recorder at hand. A collection of outbreaks, readings, music and drunkenness… The act of recording is indispensable to the assimilation of the surrounding flow. He fully experiences this when in motion, and comes back from his walks with his fingers stained from sounds and tracks… He records with delight the wasteland, the insomniac forest and the sound of the wind. Evanescence calls out to him, he has this specific need to reveal what is simply there and what vanishes, for the sake of document archiving. Wastelands and vacant lots, courtyards and backyards, distant or resonant points, acoustic funnels, are his favorite places, the in-between where nature and culture collide, where abstraction and emptiness coexist with silence.
Inserted into the network of the museum spaces, Flux donnés à entendre works as an ionizing layer, quietly modifying the relationship between sculpture, drawing, photography present in the site. By varying the asymmetry of eye and ear, he subtly telescopes an exhibition “tailored” to “fix” the look. At the same time, while he blurs the boundaries of perception, he questions the basis of the divisions of knowledge and taste. Composed primarily of what we could call recycled sounds (whether it is “found sounds” in the Museum, caused in situ, or taken from the archives, or YouTube), he proposes an atmospheric listening of the space. Besides the first title of the project was Aspirations. Probably to highlight the strong presence of the wind against the walls (which both carry the distant sounds and swallow them), and perhaps, more fundamentally, to describe the ventriloquist relationship that develops inevitably between sound and visual works as we bring them closer. But, whatever the path of the artist, what is striking is above all the joyful vitality that emanates from these sound spirals – like those Wagnerian waves frozen in midair and suspended in the mineral void of the archives room, or of those Hollywood chase scenes projected in the Cour d’honneur turned into an ironic “Drive-in pour l’oreille”.

This accumulation of listening points, but also of diverted music (smelling like spices or burnt) gives an overview of the artist’s imagination attentive to the “globality” and the crossing of energies. His exhibition proceeds with a logic of displaying and un-displaying smoothly, implac- ably. Yet Gilles Aubry rejects the notion of sound path “entrapping the listener”. He prefers to talk about “resonant sets” whereupon each listener is a mobile resonator (or a stimulator), asked to build a space based on what he hears. As an artist atten- tive to human interactions, for whom art cannot be separated from life, for whom the perks and accidents of daily life are as important as major statements, he insisted that his “journey” over- flows the Night of the Museums “to de-dramatize the context of its reception.” “My role is to invent other forms of listening,” concluded Gilles Aubry who wishes that his works inhabit the Museum premises “as if they had always been there.”