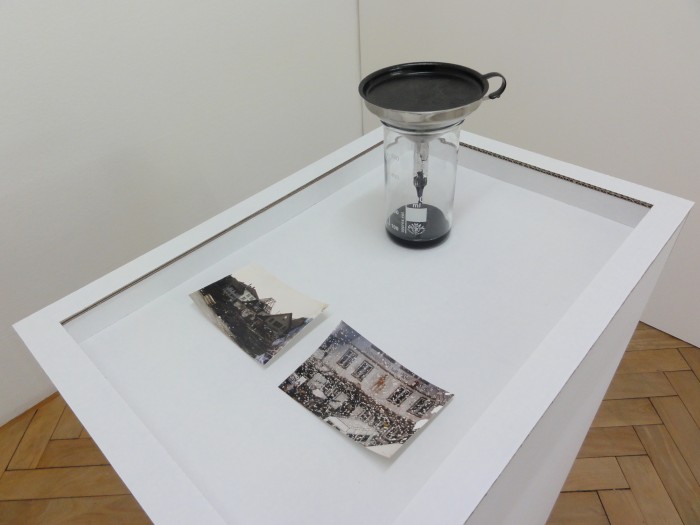 Body of installations by Gilles Aubry & Yves Mettler commissioned by the Kunsthaus Langenthal, Switzerland (exhibition on view May 3 – July 8 2012).

“For their joint exhibition project “Black Move” at Kunsthaus Langenthal, Yves Mettler and Gilles Aubry have conducted intensive research work. Their points of departure are marked by the demolition of the “Tell” restaurant in the centre of Langenthal in 1981, carried out by a large military and civil defence exercise, and Ammann’s asphalt mixing plant named “Black Move”, manufactured in Langenthal and employed in remote regions of the world to build roads. From their recordings and the materials they found in private and public archives, the artists developed a dense itinerary for the Kunsthaus Langenthal. Images, sounds and language, initially presented as separate elements, can be brought together in the mind in ever new combinations throughout the entire show. This publication with image and text documents resulting from the research work is a key element of the show.

Why and for which purpose are pictures taken? This is a question the artists repeatedly raise in the entire project. The exhibition starts with the installation … Jetzt ist es zu spät [Now it’s too late]. It displays two photos originating as personal keepsakes, yet attaining a new function in the context of the exhibition. The photos were shot by the last person who ran the “Tell” shortly before its demolition in 1981. They are blotched and yellowed, bearing traces of the time that has passed – they function as documents in two senses. The slow passage of time is symbolised by the second element of the installation: A viscous black mass slowly flows into a funnel. It is an experiment with bitumen, as the artists witnessed it in the labs of Ammann AG.

Under the keyword “Business Continuity”, companies offer services that are meant to guarantee the continuation of business in case of a disaster. In the office architecture alluded to in the installation Business Recovery / Disaster Continuity, one can read words and listen to sounds that are constantly recombined
according to a random principle. The sources consist in commercial dealings with disaster scenarios, the description of processes having to do with road construction, the vocabulary of managers, or 1980s punk bands, whose lyrics are peppered with apocalyptic metaphors.

“Black Move”, the name of Ammann’s mobile asphalt mixing plant, gives rise to associations going far beyond technical descriptions. It could also be the name of a band or a youth movement. Black triggers many associations and connotations, for example, in combinations such as “black gold” or “black death”, as they can be found in the installation Black Words. In the case of the asphalt mixing plant, “black” mainly refers to road construction, to bitumen. The oil product is an important component of asphalt. When visiting the Ammann laboratory, the artists were fascinated by its materiality and brought empty buckets from there, filled with the rests that turn into black mirrors and emanate the smell of freshly tarred streets. In the same room, there is also Windmachine, an instrument constructed according to a 100-year-old book on theatre engineering, not, as is common, with wood, however, but with heavy industrial material. It serves to simulate the sound of wind and storms, which in theatre often refer to disasters or ominous moments.

Traces of a real storm were filmed by Aubry and Mettler in the form of fallen trees near Langenthal. In the video Tree, the breaking point is scanned by a microphone, one of the most important tools of Gilles Aubry, a trained composer. But the sound is only created in the heads of the members of the audience.

During their research work, Aubry and Mettler learned that a former commander of the Langenthal fire brigade had filmed the demolition of the “Tell” in 1981. The soundtrack of the video The Preview consists in the conversation that the artists, the Kunsthaus team and the filmmaker held while watching the film for the first time. The contemporary witness (who recollects) engages in a discussion with the younger outsiders (who interpret the past) on the demolition of the “Tell”, which some people opposed as an urban-developmental disaster, and superimposed by the simulation of a major catastrophe, a military air raid. The image level includes, besides English subtitles of what is said, other texts referring to disasters, explosive events and expectations of a major caesura. They are drawn from the early 1980s as well as from the present, looking back on what happened at the time: documents of the movement of the 1980s and the punk scene, statements by the super-rich, blogs of activists from Central Asia.

In the installation Der Sand der kommt, der Sand der geht (The Sand Comes, the Sand Goes) Aubry and Mettler return to the question pertaining to the function of images. The photos shown in the installation are of various origins: Some are from the prospectuses of Ammann AG advertising for the asphalt mixing plants made in the context of opening up new markets in the Middle East. Commerce between two cultures is conveyed by images that are also meant to arouse emotions. This publication presents conversations between the artists and the photographers as well as with the employees of the marketing department on this topic. The pictures, however, also make reference to the old art-historical genre of landscape painting, which fulfils the traditional desire for beauty. The artists photographed landscape images of a different sort in Langenthal. They were interested in industrial wastelands that have become overgrown and are turning into new biotopes for birds, for example. However, the stuffed birds on view in the installation are partially more than a hundred years old. For decades, they were displayed in the Jägerstübli (Hunter’s Room) of the “Tell”. Alongside the documentary material, concrete relicts of the history of the “Tell” have made their way into the exhibition. The birds, personifying the overcoming of spatial distances, here also overcome time. Further components of the installation include photos of the “Tell’s” interior, taken during the last days before it was demolished. The shots of the demolition itself are from the archive of the Langenthaler Tagblatt. Photographed from the originals, they stand for the entire richness of material that the artists came upon during their comprehensive research work.

One highlight of these documentary findings is the super 8 film by Werner Ingold, who documented the demolition of the “Tell” in detail in the frame of the military exercise “Mezzo”. The last space of the exhibition, in which the film is screened, will also become the space of debate, of exchanging memories and interpretations of the past, enriched by that which has just occurred – that which, in the end, seeks to again be completely traversed and newly interpreted in order to exit the show.

The publication is to be understood as an integral part of the project “Black Move”, uniting elements of the comprehensive archive of texts and images compiled during research work. A central element is formed by the recordings of conversations that Mettler and Aubry held in Langenthal. Talks on the demolition of the “Tell” and the image communication of the Ammann AG are directly linked to elements of the show, augmented by interviews with entrepreneurs supporting the Kunsthaus. In this context, Aubry and Mettler reference a research project by sociologist Ueli Mäder, who interviewed wealthy Swiss in regard to patronage, among other things. His text in this publication sets the records of Mettler and Aubry in relation to his research. The communicative experiment of the two artists has thus also formed the material for scientific research. As can be seen in the printed records, the conversations are by no means formalised scientific or journalistic interviews. Instead, they tentatively examine the usually intransparent relationship between money and art. The idea is that the unusually direct questions which the artists posed to the financers could create a situation in which transparency is possible. The artists did not pursue a proposition in a targeted way, in the sense of an abstract, critical, political discourse. They are aware that they are acting from a position of weakness in an experimental setting – and are themselves in the midst of it as artists.

These versions of the conversation transcripts have already been edited and corrected in several stages, by an editing of the Kunsthaus team and counterchecked by the interviewees. Even though (or precisely because) there is nothing explosive covered up by the corrections, this development process also tells of the dilemma of genuine intransigence and unrestricted integrity in artistic work.” 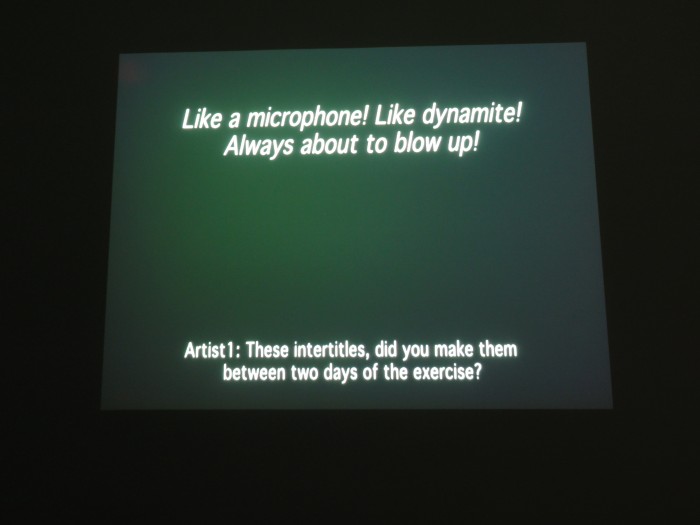 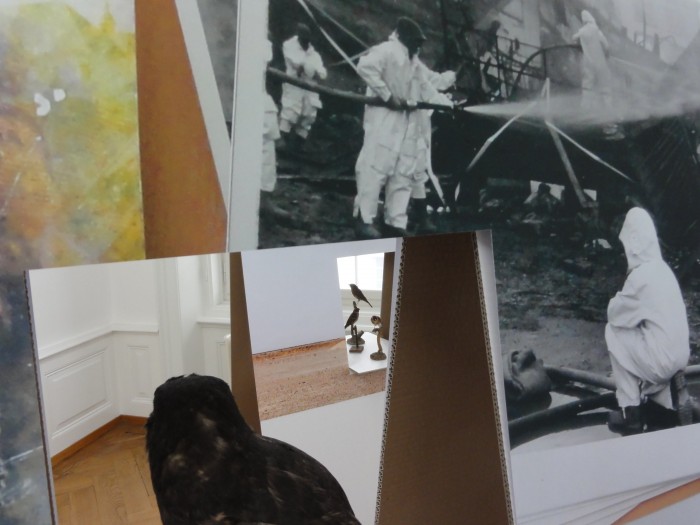 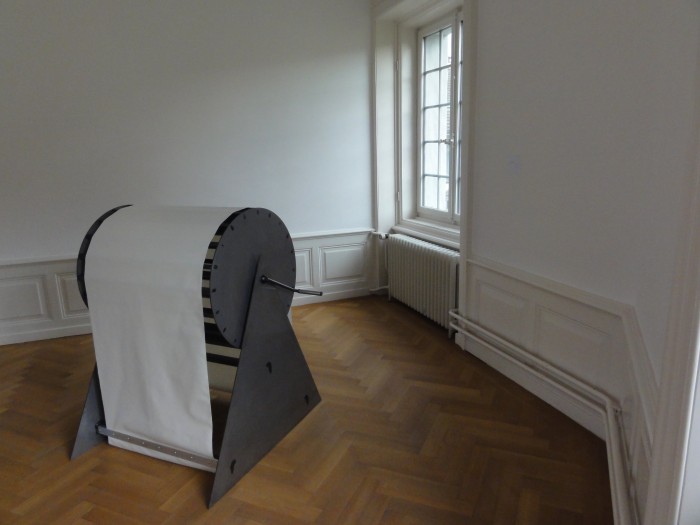 A catalog has been published at the occasion of the exhibition, available at the Kunsthaus, Langenthal. View the pdf version here: