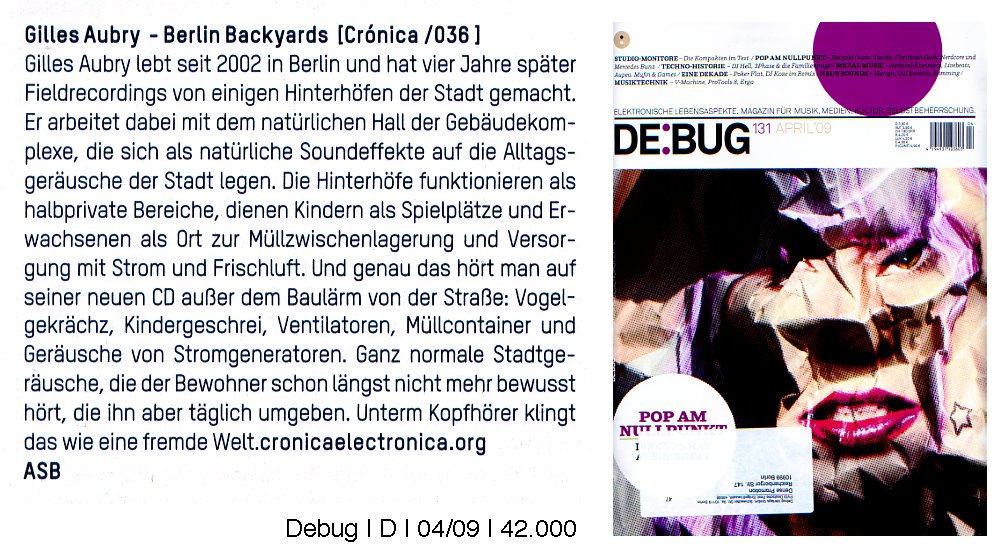 Obviously Aubry’s idea of a typical Berlin backyard isn’t a quiet and peaceful haven one retreats to as a respite from the noise of the city but instead a place where loud, industrial machinery churns relentlessly. Such equipment—air conditioners, trash compactors, recycling containers, electric power stations, all of which keep the city running—exhales convulsively like a living organism throughout the recording’s forty-nine minutes. Aubry spent the winter of 2006 recording the city’s backyards, and in the process became more sensitive to the setting as an interzone between the public and private sphere. The eight-part musique concrète composition the Berlin-based sound artist fashioned from his source material implicitly argues that the city’s backyards operate according to rhythms very much like a human being’s. The opening sections are aggressive, even violent in their indomitable churn and throb, and the sound is so intense it feels as if one is positioned within the machinery (as an indication of track one’s character, imagine a microphone positioned close to the tracks of a subway car in order to best capture its screech). Though the intensity level subsides somewhat during the recording’s middle section, allowing quieter noises such as water, footsteps, and voices to be heard, the activity level never flags, and soon we’re thrust once again into the belly of the industrial beast. Traffic sounds of cars racing past appear alongside machine rumble and workers’ clatter in the final section. It bears mentioning that, here and elsewhere, Aubry doesn’t merely juxtapose field recordings or sequence them but instead arranges the materials into a large-scale conceptual whole that, in its way, becomes almost musical.

One of the things I like Berlin (and some other German cities), is the backyards which houses. A small entrance and then you are surrounded by four sides of houses and apartments, and which are excellent for parties, concerts and such like. A form of social control also, that might be the downside, but I don’t know: I never lived in Berlin. The backyard is also the place were all the technic stuff from buildings come together, like ventilation, trash, recycling containers and electrical wiring. A noisy place by itself, and sometimes allowing street noise to come in. I never made any recording in there, but Gilles Aubrey, who lives in Berlin since 2002, did, perhaps with the same fascination for these places. Its not easy to say what, if anything at all, Aubrey did to the sounds he recorded. In these eight pieces there are moments when I think these are pretty straight forward field recordings, and in other cases I seem to think that uses loops of the material. My best guess is however, that’s a combination of both. There is however very little other ‘processing’ going here, save for a bit of panning and equalization. I thought that was a pity, since eight of these pieces is pretty much. The street sounds, electric power station, the rolling of containers: after about six pieces you know the drill of it.

Spiritualarchives
In the creative experience of Gilles Aubry (Swiss sound artist living in Berlin) references are a recurring use of field recordings and, at the same time, an evident interest for some characters of musique concrète. Gilles deals also with electronics and computer programming, with results ranging from experimentation to improvisation, matters handled with personal interpretation and elaborative approach.
His discography includes a release on Creative Sources (as SwiftMachine) and a participation (this year) to “Berlin Electronics” on Absinth Records.
Moreover, he is involved in other projects (Monno, The Same Girl), author of sound installations and protagonist of live performances.
This new disc issued by Crónica exactly shows the side of Aubry devoted to (re)construct environmental recordings (this is what happens listening to the eight untitled tracks of the album).
Despite the use of multiple sources taken from various locations in Berlin, their perfect assemblage makes “Berlin Backyards” a work surprisingly uniform. In fact the pieces could be considered eight movements of a suite because of the continuity that each gives to the previous one, almost like a single recording from a single source. All the material has been treated to produce an indistinct mass of spatial sound, obtained with a fusion of daily life moments captured from the natural/animal world or extracted from the human living. Through his narration of what is around us, Aubry provides passages of musique concrète at highest levels.