Sound piece based on field recordings made in several backyards in Berlin during the winter 2006. 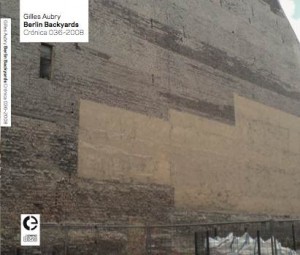 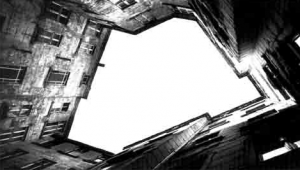 Backyards (or courtyards) can be described as transitory spaces between private and public territories, houses without a roof and enclosed streets at the same time. They are the place of various types of neighbouring interactions – from friendly greetings to perverse voyeurism – which include a dimension of mutual social control, both aural and visual, on the name of the community’s security.

In many cases, backyards reveal visual surprises in contrast to what one could expect from the street point of view: a peaceful garden, a school playground, a metal workshop, big ventilation systems, piles of anonymous garbage or, typically in the case of Berlin, a huge empty no man’s land.

On the acoustic level, backyards work like big resonance chambers: Loud traffic noises from the street are being heard through indirect reflections, filtered and attenuated by the high walls surrounding the empty yard. Quieter sounds from activities within the yard or from the houses around are being amplified. Because of this natural balancing and smoothing effect, backyards soundscapes offer a high acoustic resolution and constitute interesting sound sources for recording.

For Berlin Backyards, Gilles Aubry has chosen to record a dozen of them. The sound files have been then assembled together in a composition with the help of a piece of software designed especially for this project. The computer generates a flow of sound by scanning through a recording and then blends in the next one, revealing the space progressively.

The result is a minimal sound piece like an invitation for deep listening, aiming at attracting the attention of the audience on the sound qualities of the several spaces and on micro-variations in the peripheral sound environment. Abstract and concrete at the same time, Berlin Backyards is a piece that remembers the listeners for their role as composers.

The live version of the piece uses a quadraphonic speaker system for an increased spatial impression.

Berlin Backyards has been presented for the first time at the Kleine Field Recording Festival in Berlin on the 4th of February 2007.
Other presentations followed in the USA during summer 2007 (Sonic Circuits Festival in Washington DC, Issue Project Room in NYC) and later on the same year in Europe.

Listen to audio samples of the live performance: