From A to OM – WWI Indian prisoners voice recordings 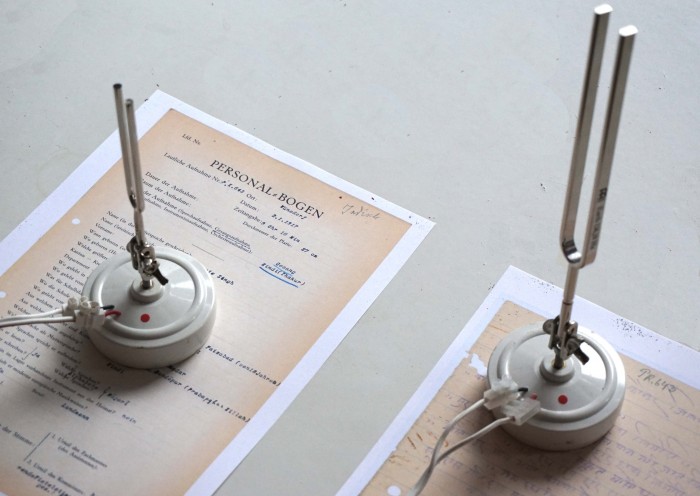 Installation at the Goethe Institute Bangalore, December 3 to 5 2015, for the “Digging Deep, Crossing Far” group exhibition.

The installation focuses on recordings of Indian prisoners from WWI excavated from the Berlin Humbolt University collection. The work refers to specific elements such as reference tones, mechanical devices and terminologies used at the time by the German scientists as part of a system of measurement and classification of human voices based on ideas of racial purity and linguistic comparisons. By revealing such principles, the installation is an invitation to engage into a reflection on the problematic ethical aspects of this ‘sensible’ collection. Simultaneously the reconfiguration of these elements into a new soundscape opens up possibilities for contemplation and yet unheard epistemologies.

Two tuning forks are presented in the installation, ringing at their respective frequencies of 440 and 136.1 Herz. The first tone corresponds to the “A” piano note and can be heard at the end of each recording made by the German scientists as an acoustic reference in order to adjust the speed of the gramophone during playback. The second tone corresponds to the “OM” frequency which is used in both the Hindu philosophical tradition and Western esotericism, derived from the rotation speed of the Earth around the sun. The record on the turntable starts with the “A” note followed by a music recording in Hindi language from the Humbolt collection. When playing the record, the original recording can be heard slowing down gradually until it reaches a playback speed corresponding to the “OM” frequency, which is heard again at the end. Through this operation the recorded voice shifts from an object of scientific study to a subject of contemplation and meditation.

In addition a synthetic English voice can be heard reciting a list of words which have been translated from the evaluations of the prisoners’ voices written by the German scientists. As the technology of speech synthesis is itself a product of linguistic sciences and indirectly of researches such as the ones carried in the WWI prisoner’s camps using recording, the synthetic voice appears as a technological organ commenting on its very own inception.