The performance’s title « Camp Victory » refers to the name of the bigest US military base in Bagdad, hosting twelve thousands soldiers and providing them with services like short-order grills, ice cream bars, churches, internet cafés, gym and more.

The piece is built on two central ideas : the use of blogs published by american soldiers during the war in Irak and a live performative work based on headphones transmission.

The blogs collected on the internet were the main source for the text of the performance, which have been written in a mix of french and english, using several principles like re-writing (from translation to cut-up) and permutative/generative techniques with the help of a software programmed by the authors. The resulting text has been spoken by the authors and several guest voices, then recorded and distributed to the several tracks of a multichanel tape.

The ‘talking head’ principle is a technique by which a performer has to repeat what a voice is saying in his/her headphones, becoming therefore an obviously remote controlled voice & body. The voices and other sounds transmitted are part of a pre-recorded composition which is not directly audible by the audience, but only through the subjective and each time different intepretation by the performers. Therefore the audience is confronted to two separate universes, one of them sonic and perceptible and the other hidden and manipulative. However the audience has the possibility to hear the content of the hidden tracks through headphones located in a room which is acoustically (but not visually) separated from the performance space.

The performers are in a difficult position where they have to listen to what they get in the headphones and at the same time render this to the audience. Because of their headphones, they can’t realy connect by audition to the others and find themselves in their own private sound space. This creates a very unnatural situation where all the codes of theatrical interpretation and interaction are changed. The impossibility to hear and react to what the others do and the strong control from the tape lead to an alienated comunication, close to propaganda and manipulation.

Musicaly, the piece is about extending the possibilities of vocal ‘music’ to the whole spectrum of electronic sounds. When asked to reproduce a spectraly impossible sound for the human voice, like some complex electronic sounds, the performer must invent a way to extract informations from that sound so that he can find a way to interpretate it. The sounding result will depend thus not only from his vocal skills, but also from his listening skills.
Another formal aspect of the piece is the corrupted timing induced by the listening/repeating process. Because all durations have been pre-defined on the tape, it is not possible for the performers to change the speed of the dialogues like in a normal theater situation, even if they can change their interpretation of the sentences they get. When the text gets faster and longer on the tape, the performers must concentrate much more to keep understanding it and the situation becomes more and more autistic, up to the point where they all speak at the same time and where the information becomes noise.

The performers are enclosed in an arena, separated from the audience by a semi-transparent plastic net. The listeners are free to move all around this space and on the two levels of galleries above it. The sound is spatialised through eight speakers placed in the corners on two levels. The constraining principle of the composition combined to the visual filter resulting from the net around the arena maintains a tension throughout the whole performance, extending formaly the violence of the central theme of « Camp Victory », that is the war in Irak and its transmission trough the mass-media.

Camp Victory has been commissioned by the festival Les Nuits de la Guitare and premiered on the 3rd of november 2005 in Lausanne, Switzerland. 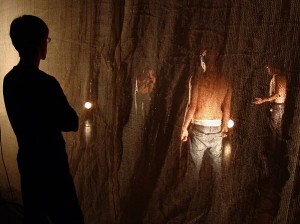 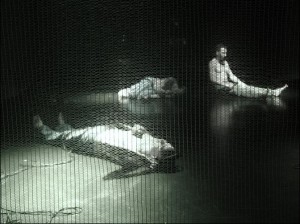 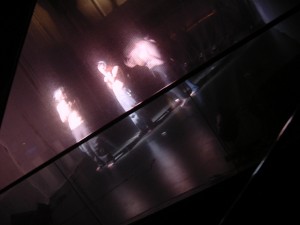 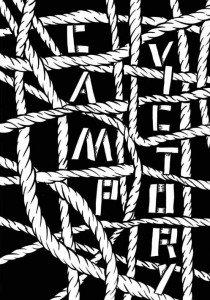