Six Cows is a sound installation by Gilles Aubry and Soichiro Mitsuya, commissioned in 2005 by The Espace d’Art Contemporain (EAC) in Porrentruy, Switzerland. 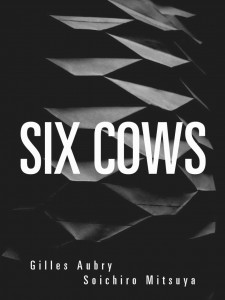 The central part of the installation is a circular object made of natural cow leather, handfolded and assembled with wooden parts. The object hangs up from the ceiling and moves slightly, driven by a motor located inside. The mechanical principle of the movement makes use of the natural resistance to compression of folded leather. Reacting like a spring in the contraction and expansion phases, the leather opposes its resistance to the strenght of the motor. The resulting movement has something mechanical and organic at the same time, also because of the inertia of the system.

Around the central part, a system of four loudspeakers plays a five-channels composition made of digitaly processed cow sounds and human breath, arranged in a 20 minutes loop. A fifth loudspeaker is located inside the object.

In this work, a balance had to be found between its technological and natural components. The technological apparatus is deliberately not powerful enough to master completely the resistive force of leather and the one of gravity. The same happens on the level of sound, where naturality is still to be heard despite digital processing. The resulting tension contributes to the remarkable poetical aura of the installation. 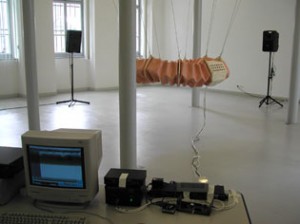 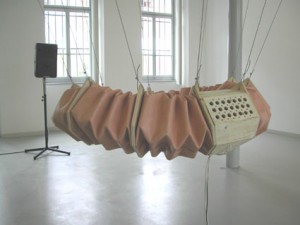 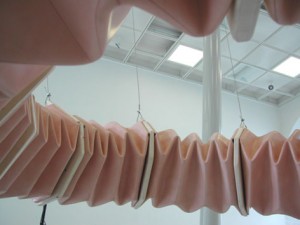