Series of performances given together with media artist Ulrike Gabriel and the Flow Ensemble in Germany and Holland in 2002 and 2003. The project was developed partly during a residency at the Goethe Institute in Rotterdam in january 2003. 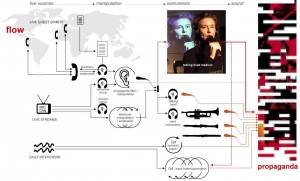 Flow is an immediate and personal response of musicians, performers and participating guests to the everyday flow of public reality created by the voices of mass media and their propagandistic impetus.

In the performance the flow ensemble filters, dismantles and recontextualizes contents of these information streams, juxtaposes their inscenated realities with individual realities and generates live, a sound stream, artistic propaganda standing for itself.

Flow invites ‘spirits’ somewhere else on the planet to participate as live interacting guests, who speak through a talking head medium anonymoulsy and directly into the performance. Flow’s setup, structure and principles provide a protective and flexible propaganda environement which supports participants under any conditions to articulate clearly whatever they personally want to state.

During the performance flow’s manipulators listen constantly to the voices of broadcasted media streams such as CNN, FOX and BBC and pick up sequences as the first major source for the sound stream.

The further sources are personal voice inputs. Shortly before the concert people on the street are interviewed. Their statements are used for the generation of the second and third content layer in the performance.

Invited guests are present in the performance through a telephone line and participate as content feeds. They speak in live through the voice of a perfomer who repeats what she gets in her earphones.

Flow has been performed in Berlin, Rotterdam, Utrecht, Stuttgart and Argentinia in 2002 & 2003.