Series of performances hold in several public locations in Berlin and Hamburg. 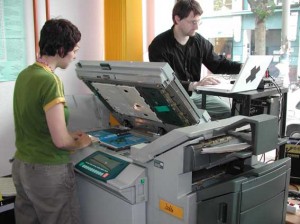 At first with the trio Swift Machine and later in solo, Gilles Aubry researches about the limits between public and private spaces, visual and sonic communication, and hidden art actions in order to escape from conditioned behaviours.

The people’s activities, the light, the ambient sound and the space itself are considered as a musical universe to improvise from/into with the computer.

By the use of slight sounds at a very low level, the performer can modify the surrounding sonic environment to his ears and other people’s in a non-constraining way. People around don’t have to stop their activities to let the ART happen.

There is no advertisement for these events and concert-like situations are avoided, so that people around don’t become the audience of an artistic event.
They are not asked for special attention and are incorporated into the performance in their everyday life role.

In SECRET MUSIC, Gilles Aubry develops this idea one step further by trying to stay unnoticeable during the performance.

While in ‘ORTMUSIK’, his was using external speakers in order to amplify his sounds which signalised him as a musician to the other people, in ‘SECRET MUSIC’ he uses only the laptop with its very small built-in loudspeakers.

He sits within the crowd with his computer on his knees, playing his sounds and appears at first to the people around as someone working for himself with a laptop computer with apparently no intention of public expression.

A secret concert situation is thus created, where the performer is the only person who can actually hear the musical result of his sounds being mixed with the sonic environment, because of the very reduced sound level.